I went missing-in-action during mid-April’s Coachella ’11, ending a seven-year run of consecutive trips to Southern California’s Coachella Valley. That’s why I needed a Lollapalooza Moment to slap me to my I-wish-I-was-there senses.

It was a timely reminder that it’s not too late. The summer concert festival circuit makes its way early next month to the Great Pacific Northwest, with Bumbershoot in Seattle and MusicfestNW in Portland.

This month was Lollapalooza ’11, marking my 19-year-old niece’s maiden voyage on the festival circuit.

At Chicago’s Grant Park, she does what thousands at such festivals do: asks a random stranger to take a picture of her and a friend. Dude obliges, then bolts into the crowd with her months-old iPhone 4.

My niece, an athletic college-level soccer player, takes off after dude without hesitating (or thinking, her mom and sisters might say). She runs down dude, grabs him from behind, tearing his shirt, and punches dude in the face, nearly knocking down his throat the still-lit, half-smoked cigarette in his mouth. She grabs her phone and walks off.

Enter the 11th Annual MusicfestNW (musicfestnw.com). Launched in the 1990s as North By Northwest, Musicfest will be staged nightly at nearly two-dozen venues in downtown and inner Portland. 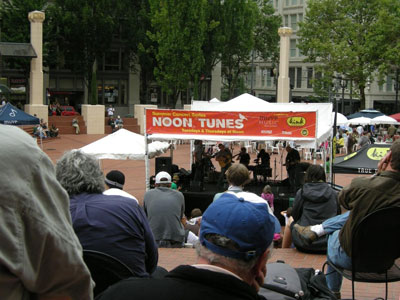 Part of Musicfest’s magic is that it comes on the heels – there’s a day’s break between – of Labor Day weekend’s annual Bumbershoot, Seattle’s Music & Arts Festival (bumbershoot.org).

Doing both the same year is an intoxicating one-two punch. I know from experience.

Bumbershoot ’93 was for me as Lollapalooza ’11 was for my niece last weekend. Though, no, I didn’t have a Lollapalooza-like Beat-Down Moment. Not even close.

Of course, I wasn’t a teenager at the time. Nor did I have a phone on me, let alone one – an iPhone, no less – with a camera.

Having experienced Bumbershoot that year, I also didn’t have the summer concert blues.