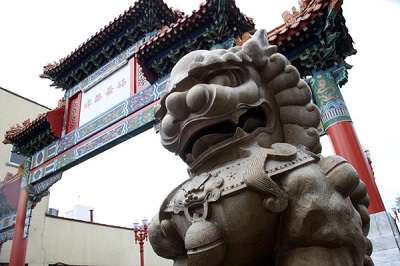 Portland’s Old Town /China Town neighborhood is the oldest neighborhood in Portland dating back to the 1850’s when the first Chinese immigrants arrived. The Portland Development Commission has a 5 year plan in affect that will help revitalize the area for new businesses and residents alike. I grew up in Portland and have fond memories of what China Town was like when I was younger. I remember driving into downtown Portland guided by the Made in Oregon sign and feeling something magical as we crossed the river. Our family ate at a local Chinese restaurant for years that is still standing on NW 4th Avenue in the heart of China Town. Today the neighborhood has some charm with its red streetlamps, pedestrian / carnival streets and massive Fu-Dogs that guard the gates. Mixed in with these iconic landmarks are some things that are less impressive. Today there is a large homeless population, a permanent homeless camp at the gates of China Town and more crime in this area than anywhere else in the city. The 5 year plan is desperately needed and is starting to finally break ground.

In mid September 2014 a real estate investing company, Gerding Edlen, purchased a property from the PDC (Portland Development Commission) on NW 1st and NW Davis with plans of constructing a 6 story $37 million multi use building. It will have ground floor retail, offices and 58 apartments with an estimated completion date of early 2016. This is the first of many projects needed to turn this area around, increase small business, encourage middle class residents and get the ball rolling on the 5 year plan.

The 5 year plan is an attempt to create a safe, vibrant, economically healthy neighborhood while honoring the history and multi cultural backgrounds of the area. The PDC is estimating about $65 million in tax increment financing will be utilized in the district over the next 5 years. Success of the plan will include the following: 5 new retail stores, 500 new living wage jobs, 500 new housing units under construction or completed, 5 rehabilitated buildings in process or finished, more events in the areas and a district wide parking strategy. Small steps are already being made to accomplish these goals.

In the last few years there have already been some major improvements to the area that are notable. The old abandoned Burger King building that was on the corner of NW Broadway and W Burnside was torn down and in its place a new modern low rise building was constructed that is home to Central City Concern (an organization that helps individuals struggling with mental health and addiction issues.) Airbnb.com moved it's headquarters to the Blagen block building in Old Town and created 160 new jobs in Portland. There are many established restaurants and attractions in the area as well: Voodoo Donuts, Dan and Louis Oyster Bar, The Republic Café, Ping and much more. China town / Old Town is home to Portland’s well know Saturday market and great transportation. China Town /Old Town really has a lot going for it and so much potential to be the vibrant neighborhood it is meant to be.

The city of Portland is proposing $7 to $20 million in fee waivers for developer incentives to construct new apartments. Current law only allows these fee waivers for developers building low income housing, these will for sure not be low income housing with monthly rents in the $1500 range for a one bedroom. Currently there are 4000 residents in China Town / Old Town and 2/3rds of them make less than $25,000 a year which puts them well under targeted incomes for these new developments. The plan will encourage middle class residents into the neighborhood; this will help with new retail and higher density. Both of which our city needs.

Despite all the less desirable attributes Old Town / China Town has at the moment there is much hope for the future. The neighborhood is on the verge of a real estate boom. Younger folks are tired of the Pearl district and want to be in a more vibrant area with history and culture. Old Town/ China Town is just the place for this. Pacific Northwest College of Art is opening a new campus in the neighborhood in January of 2015 that is expected to bring 1300 students and 240 faculty and staff to the area. Multnomah County is opening a new Health Department headquarters next to the Bud Clark commons that will house 200 employees. The 5 year plan is a good start to get this historic neighborhood booming again. It will be fun to watch it come alive with the new construction while maintaining the vibe of the already established culture.