Living on a Floating Home in Portland

Living on a Floating Home in Portland

Portland is known for its inner NE and SE neighborhoods with charming bungalows, tudors, craftmans and ranches. It is known for being eclectic and funky with restaurants, shops, great schools and excellent neighborhoods with a sense of community. What many do not know is that there are a small amount of floating homes in Portland that also embody the NW lifestyle that we all love and is why we choose to call Portland home.

I lived in a floating home on the Columbia River – this river divides Oregon and Washington – for over 6 years and learned alot about living on the water. There were things that came up that I would have never thought of or imagined would be issues of living on the water and other things that were amazing. There are floating homes up and down the Columbia River and some on the Willamette – this river divides East and West Portland. The Columbia River is broken down in two areas when it comes to floating homes. The first is North Portland, Hayden Island and Bridgeton road; there are 16 moorages in this area. The second in East Columbia and starts around NE 181st and Marine Drive, there are only 6 moorages in this area. The Willamette has only 3 moorages and they are all located rather close to the Sellwood Bridge, Oregon Yacht Club is right behind Oaks Park in Sellwood. The Willamette usually boasts higher prices than the Columbia, is closer to downtown and has less inventory- right now there are only 2 floating homes for sale on the Willamette River. The Columbia has a large range of sizes and prices for floating home and many different Marinas to choose from.

The home that I lived in was completely remodeled right before I purchased it and moved in. I was in the market to purchase one on the Columbia River, as the prices out East were much lower than the ones closer in, but had a hard time finding just the right house. Many floating homes come with boat wells – this is a garage for boats- and since I didn’t own a boat and wasn’t planning on purchasing one it was a waste of space for me to have one. The home I settled on after looking at many floaters was a good fit for me with 3 bedrooms, 2 bathrooms, an open floor plan and lots of exposed wood. There was only one issue with the home I purchased, it had to be moved. It was located out in St Helens and the owner was going to build a new floating home for him in that slip – the slip is the water space that the houseboat sits on.
That started the search for a new slip for the floating home. I was unaware that some floating homes that you purchase come with the water space, the slip is included in the purchase price and therefore the overall price is more expensive, but the monthly HOA fees are generally lower when the slip is owned. I needed to find a moorage that rented water slips as I did not have the funds to purchase the home and also purchase the water. It is challenging to find a slip to rent anywhere in Portland, both on the Columbia and the Willamette. Water spaces are limited and river people usually stay on the river and move from house to house as they need more or less space. I was lucky enough to find a Marina that rented spaces and was willing to create a new spot for my floating home. This came at a price though; the move from St Helens to East Columbia was $5000. It took 2 days and I can’t describe how nerve racking and exciting it was to see the house chugging down the river being pushed by a tug boat to its new home.

Once the home was in place the move started and so did the adjustment to river life. The Marina where I landed had its own boat launch and a barge that we could use to move things in and out. It came in very handy when moving all the big stuff to the houseboat; otherwise we would have had to navigate the ramp and docks. Depending on the water level and the time of year the docks can be slippery or icy and the ramp can be very steep. That was one thing I didn’t anticipate, the time it took to navigate the docks and ramp in the winter. I think that is why about 50% of the owners only use their floating homes in the summer or weekends. After moving in was complete, carrying everyday items such as groceries was a major pain! It was worth it in the summer when the weather was nice and I could take my time walking the docs, but in the winter with all the rain we have it was not fun. I even had to bring a change of shoes and get some serious rain gear in order to get to the car in one piece.

Other things that came up with river living was multiple power outages, the houseboat hitting bottom and the sewer line disconnecting. When the power was out nothing would function on the floaters, all the water came from a private well and had to be pumped to the boats so when the power was out the bathrooms were decommissioned also. The first year I lived there the power was out for 3 days, it was a lot like camping in the winter. Not fun. The second summer I was there the water level was so low that the house hit bottom and not evenly. I woke up one morning and felt off, after looking outside I noticed the neighbor’s house sideways and then realized mine was too. The South side had hit bottom creating a fun house kind of effect, the good thing was it only lasted for about a day and everything was fine once the water went up. The worst thing was the sewer line disconnecting from the house to the dock and being responsible to hook it back up. There is nothing exciting about that scenario and unfortunately this happened many times while I lived there. I came to the conclusion that it was very unnatural for houses to be on water and that is why there were so many technical difficulties.

With all that said, there is a magic about living on the river that is unattainable anywhere else. Every morning I woke up to unobstructed views of the river and island not far from my doorstep. After work every day I entered the gates and left the rest of the world behind, there is a sense of safety and community like no other with river living. During the Spring I got to watch the wildlife have their babies and the ducklings swim through the logs under my house. In the winter I got to turn on the gas fireplace, bundle up and watch the river ships cruise on by. In the summer I was able to sunbath on my swim float – a separate deck area – and kayak right off my house. I was able to meet all my neighbors, have bbq’s, fish and take boat rides. In the fall I was able to watch the water rise and leaves drop and still enjoy my outside spaces for awhile longer. One year there was even a sea lion right outside my door barking away! The river life really is about nature, being outdoors and entertaining.

In a perfect world I would own both a land and river house. Living on the river is an experience I am glad I had the opportunity to partake in. I now live on a land house and am happy there, although on those hot summer nights I long for the floating home, cool river air and quiet river nights. 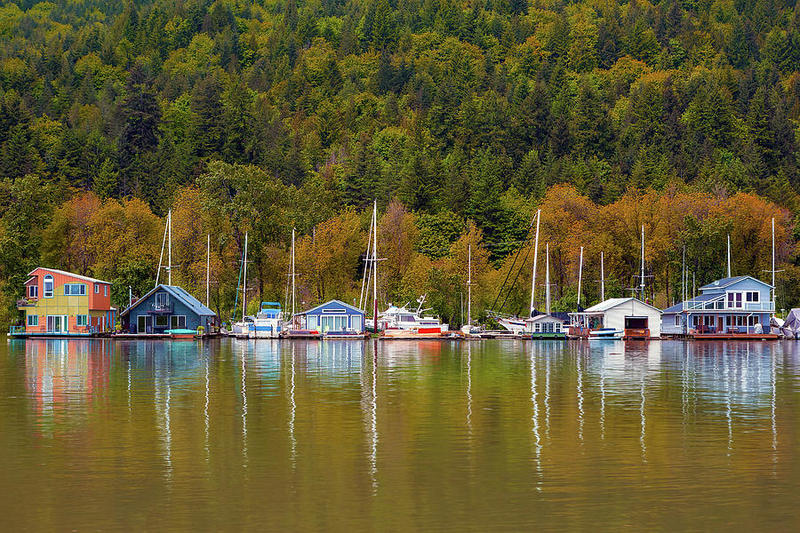